Coffee & Cigarettes by Industreal
Originally uploaded by industreal.
yabba
Posted by Jim H at 7:04 AM 3 comments: 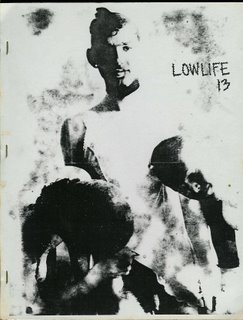 Glen Thrasher and his roommate Ellen McGrail put out Lowlife from Atlanta during the '80s and also played in an art-noise band called Medicine Suite. Thrasher later became an indie rock footnote - he was in the first band with and accompanied Chan Marshall from Atlanta to New York City where she gained fame and fortune and a degree of madness as Cat Power. Thrasher at last check is back in Atlanta working at a bookstore - here's his blog.

Lowlife was a thick (106 pages!) compendium of often undecipherable mail-art, underground fiction, painful comix from tortured artists, fanzine-type band interviews, reviews and so forth. Lowlife 13 also covered Thrasher and WREK (local college-type radio station) yearly music festival Destroy All Music. Thrasher would publish nearly anything including the controversial Brett Kerby's racism as art and the Psyco boys are the subject of a farcical tour diary written by me which I don't have the balls to reprint since it unblinkingly documented and lived (for the weekend) in the often misunderstood but raw racist parody that was P-drama in those days. I also opened for them, playing two songs on my old beat up guitar and announcing myself as "Billy Carter" (we were in Georgia after all). I had the time of my life down there, though, the festival was awesome - Bruce Hampton, Tinnitus, Kathy Lynch and the artist Huckaby were all there. I don't think Jarboe was there but she had played previous festivals.

I once got Brett to explain the racist stuff to me which he did and I still don't understand it - but he was trying to make a point about the art world which he found as exclusionary or perhaps even more exclusionary than white supremacists... whatever, Brett was a gay man and so I doubt he would ever find anything but an assbeating from the Nazis he liked to write about. I think he just had fun outraging people. Thrasher would simultaneously condemn them and reprint his letters (although I think he drew the line at adverts if I remember).

At any rate, here were some other highlights or lowlights from Lowlife 13.

Cover photo and Baby skull photos by Ivan H. Sladek. I can't find out much more about him but here's a link to some recently published work in Force Mental 16. Here's his Baby Skull photo from Lowlife 13: 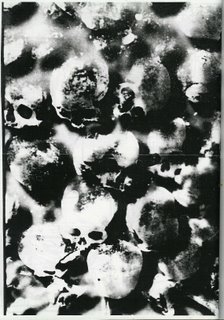 There are several interviews here, one with bassist Tim Lane Seaton (who now plays in Milk), one with the absurd (and evasive) Caroliner Rainbow and a rather boring interview with Rowland Howard and Epic Soundtracks (These Immortal Souls reprinted here). But I found the Kathleen Lynch interview the most interesting. She pal'ed around with the Butthole Surfers in the mid-80s and perform topless with them. Ms. Lynch's current band project is Beme Seed. Glen also interviews his roommate Ellen who was a performance artist who took off her clothes twice a day (as art). I just do it once a day to get into bed and it's not art. 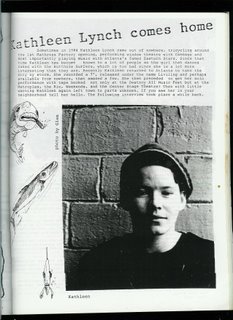 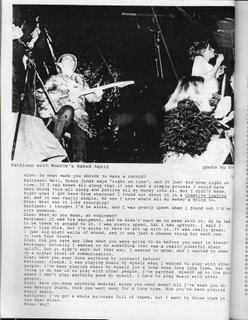 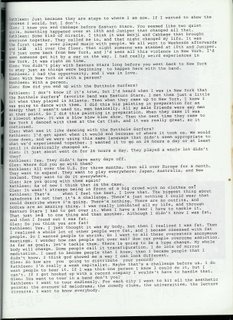 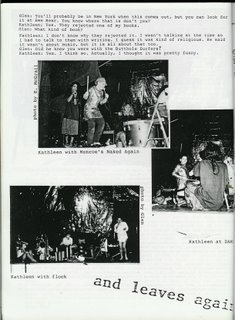 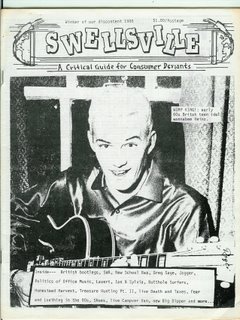 30 pages, xeroxed and binded by stable at spine.

So, there arose among the 'zines, the "think piece" zine. Not so much fanzines, although the writers were certainly fans of music but they were also fans of their own record collections, their incisive thoughts and so forth. Many of them should have been writing for the major rock publications but those guys were covering politics, fashion, trends, AIDS - anything but music and writing about music (outside of lionizing ageing rock stars or rewriting ad copy from major labels).

Jack Thompson was a Seattle-based writer who thought and thought some more and eventually started publishing Swellsville to capture all his thoughts. The think piece writers mostly wrote about their relationship to music, the ever-continuing debate of UK vs. American rock/disco/pop and, of course, their record collections. Fred Mills was perhaps the worst purveyor of that latter trait and he's in here somewhere writing about Sickidz, The Imperial Pompadours, etc.

Some of it is very good and almost all of it is very heartfelt. These weren't guys publishing zines to be the coolest non-conformist on the block. They were writers writing for nothing because they loved to write and see their words on paper.

Some of it was very funny (see Jack Thompson's review of a GG Allin album way below) and some of it was unintentionally funny - one guy tries to "save" Greg Sage and the Wipers from their association with "Pigfuck" music arguing instead that he is the voice of alienation and the "voice of hopelessness" and "if there's no room in the pigfuck inn for this sentimentality there's no room for Greg Sage."

Lots of fawning over long-gone and obscure 60's popsters (Heinz) and folkies (Ian and Sylvia) that I have as much chance of hearing today as I did back then (OK, maybe that's wrong as I'm sure there is some MP3 blog somewhere rehashing this and I could probably find it somewhere on the index or P2P black market). Jack's wife (Alle Thompson) reviews black rap music horribly and Jack's love of Camper Van Beethoveen is still incomprehensible. The round table on Jagger's Primitive Cool album is a waste of space.

Most of the best work is turned in by publisher Jack Thompson and Richie Unterberger.

Yep despite all my bad-mouthin', there's a lot to like about this, even now that most of the bands they write about are long gone. Richie Unterberger's piece on "The Politics of Office Music" is still real in most places (maybe I'll reprint it at a later date?) and Dave Beltane on the best drug-influenced artists is also worth reading and re-reading.

So, as I don't have time to scan everything in, I've reprinted Jack's seminal piece "Fear and Loathing in the 80's" or "The Butthole Surfers vs. The People."

As usual, click on the images and then you may have to click on them again to see it in full resolution or print it out for reading. There's no much visually of interest in Swellsville (besides the cover, I guess) as Thompson squashes as much text into the three columns as possible. A hell of alot of words for only $1.00 (about $1.75 adjusted for inflation). 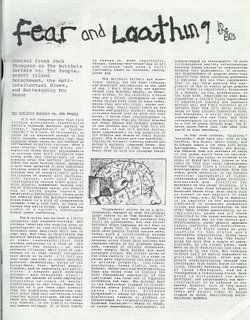 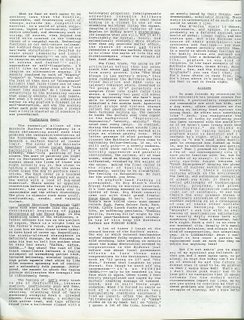 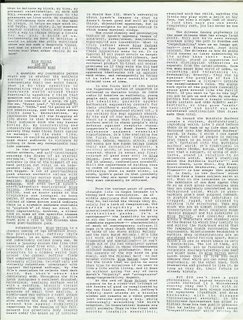 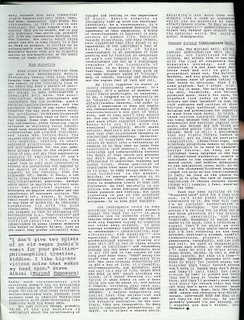 Buy it? Well, I don't know what happened to Jack Thompson but Slippytown has back issues of Swellsville for sale.
Posted by Jim H at 6:34 PM 4 comments: 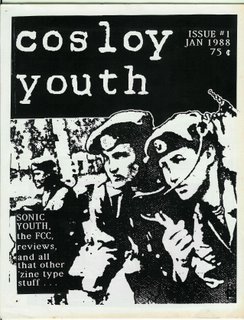 Cosloy Youth was a Houston-based zine that rather than run away from their derivativeness from Gerard's Conflict zine, they embraced it, using Mr. Cosloy's putdown of his imitators as their mission statement and proudly displaying it on their masthead (below). This issue has a massive Sonic Youth interview but since it available over at the Sonic Youth website, I'm just going to put up a page or two so you can see what it looked like (see the badly-scanned pictures basically).

Most important from these zines, I think, are the show reports - so, barring any complaint from Ray and Rob, I'm reprinting those three pages which include a Butthole Surfers report, a Sonic Youth review, Lazy Cowgirls and Divine Horsemen, to name a few. 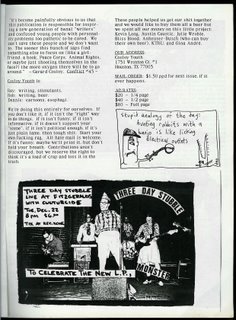 Masthead with quote from Daddy Cosloy 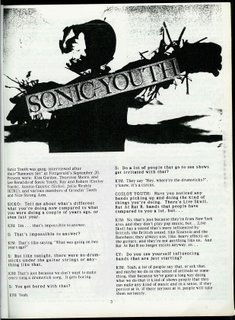 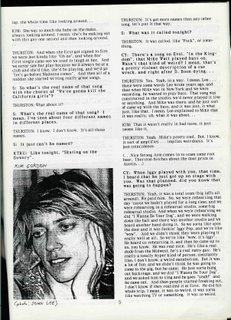 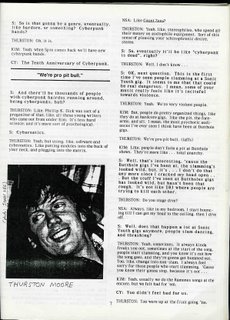 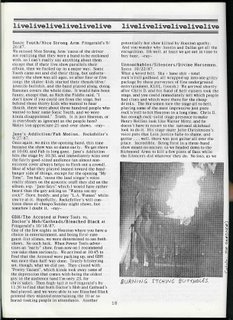 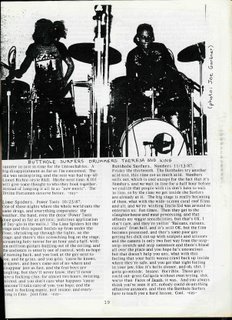 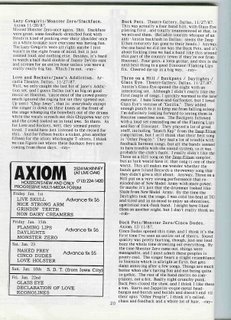